I take a lot of photos and I share some of them online via the antique medium of Flickr. Not many people look at them, which I don’t mind, because I imagine my audience to be (a) family and (b) myself, later. Photos I take with people in them are usually visible only to my friends and family. I’m a person who takes photographs, not a photographer.

But I do take some joy in the practice of photography. That’s partly because I can: at my level, there is very little to it: somebody else has done all the hard work. There is massive, long-term, highly technically sophisticated labour behind every functional detail of image capture and reproduction, which all culminates, for routine takers-of-photos like me, in pressing a button or tapping the screen and deciding whether you like the resulting image or not. It’s a ritual that has delivered a spurious feeling of creativity to people for decades, prefiguring the internet age.

There are four categories of potential joy in a photo, and they go in this order:

Obviously, photos of your friends in the pub can skip categories 1 (except in a social sense) and 2. Very deliberate landscape photos might have a lot of categories 1, 2, and 3 but not a great deal of category 4. Please understand that I am vaguely blathering about this category thing because it seemed to make sense while I was typing this, not because I think it’s any kind of real system.

I started out taking photos on film, then moved to a digital camera in 2003. By then a digital camera already gave you more pleasure in the likely quality and serendipity of your pictures, good for categories 3 and 4 above. I did keep a film SLR — a Zenit EM, the cheapest second-hand SLR available when I bought it in 1991 — but it’s very clumsy to use, and the category-2 joy you would imagine getting from it never really materialised.

In search of that sort of joy, I recently bought a slightly fancier second-hand film camera from someone on eBay. I wanted something still mostly manual, but more like the kind of thing I never had access to when young. I decided to buy a Minolta, and I’m not ashamed to say that was mostly because I like the old Minolta logo, before they introduced the more familiar Saul Bass-designed all-caps logotype in 1981. The older logo is verging on Comic Sans in its friendliness, and gives the camera a sweet face: 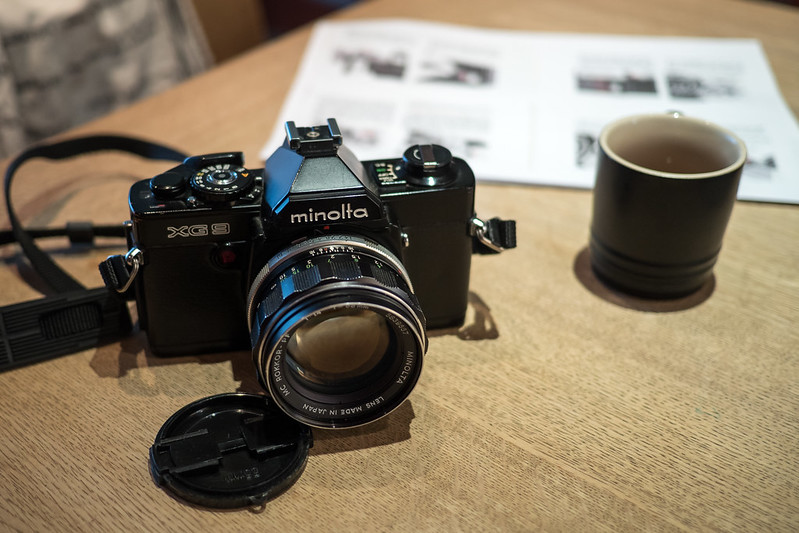 This manual-focus, manual-aperture, automatic exposure Minolta XG-9 dates from about 1980. It was the cheaper of Minolta’s two SLR ranges at the time; the body probably cost slightly more than a 48K ZX Spectrum home computer. It would have been a nice and very practical camera. It also embodies a mind-boggling amount of mechanical complexity compared with modern equipment. To the right is a schematic of the winder mechanism, one of dozens of such illustrations found in the service manual.

It was sold to me with a lens at least a decade older than the camera, a splendid-looking chunk of metal with an impressive (and apparently rather 1960s) wide front glass element.

Anyway, I bought this for my category 2, the fiddling. But so far what I’ve appreciated most is the thing I gave as category 1: just looking at the real scene more closely. Without a screen to review photos on, you have to assume that your photo will fail and you will never get to see this again. If an image should appear again, days later when you get the film processed, it’s a fresh delight.

The downside is that the economics of successful photos still apply. That is, only one in ten shots is any good. With a smartphone or digital camera you can take a hundred photos and have ten you really like. With film you buy a 36-photo roll, get three or four decent photos, but have to visit the print shop twice and spend at least £15 buying and developing the film. (Though I was surprised to find that you can still get film processed at Snappy Snaps.)

And how are the photos? Well, it’s a bit like listening to vinyl records. It’s nice for things that benefit from a bit of roughness and vigour, like this kind of thing: 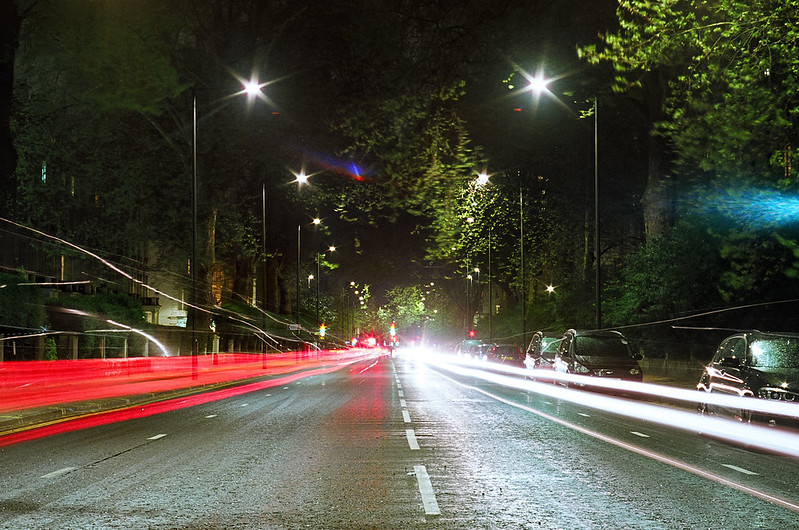 (That one wanted a lens hood to prevent the flares in the middle and right, but I didn’t have one at the time.)

Or for snaps of people:

I like both of those a lot, but I’ve yet to get any really successful landscape or “still-life” pics from it and I suspect I never will, now that I’m used to a cleaner, higher resolution digital image.

Will I be using it much? Am I going to carry it around everywhere, but take far fewer and more selective photos than I otherwise might? Probably not, but it might not be up to me anyway. These are fairly solid cameras, but this one is nearly 40 years old and has a few electronic bits as well as sensitive mechanical parts. They do fail in various ways and I don’t entirely trust that it’s going to be still working the next time I want to use it. That primitive but sturdy Zenit will probably have the last laugh.

View all posts by Chris Cannam