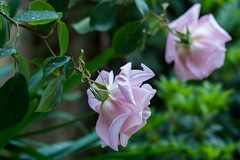 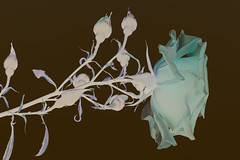 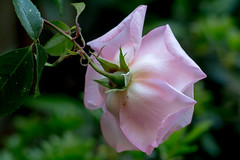 We have a Revox A700 reel-to-reel tape recorder in our home. We sort of ended up with it, in a story I won’t tell here.

This thing is rather amazing as a device. It came out at the end of 1973, I think, and was madly ambitious as a consumer product. It had all sorts of fancy things: a quartz-clocked capstan motor, servo-controlled spool motors whose speed is continually adjusted based on feedback from tape tension sensors, an optical tape-present sensor, true VU meters, two custom dedicated integrated circuits (in a consumer tape recorder! in 1973!), one for timing adjustment and one for the control logic. It supports three tape speeds (3.75, 7.5, and 15 inches per second) and has a high-quality audio preamp and headphone amp. Its service manual is over 200 pages long. It weighs a massive 24 kg, draws over 100 watts even when not playing anything, and gets very hot.

(For those unfamiliar, Revox was the consumer brand of the Swiss studio electronics company Studer, named after its founder Willi Studer. Revox tape recorders were similar internally to Studers but with more limited I/O and track counts. But when the A700 came out it was in some ways more advanced than any Studer, with much of the electronic stuff turning up in studio gear only later.)

When an A700 is working, it can sound fantastic, although using one is a nutty endeavour at the best of times. I very seldom switch ours on, and then only to play tapes of playlists chosen with my kids that have been recorded to tape from Spotify on my phone. It’s quite calming to have those reels slowly rotating in the background as the music plays, but there’s really no other purpose to it now. It is a massive, heavy, beautifully designed, expensively constructed device that can still perform its job perfectly well and yet is totally obsolete.

The A700 also isn’t all that reliable. It’s a bit like a miniature version of having a classic Ferrari. Ours has had a succession of repairs over the last few years: blown suppression caps (a bit of a fire hazard, replace all the RIFA capacitors), blown motor start/run capacitor (symptom: take-up spool rotates gently backwards instead of insistently forwards: the spool motors are AC motors and rely on big capacitors to achieve momentum), blown something-I-didn’t-understand-and-have-now-forgotten on one of the control boards. Fortunately we haven’t yet had a blown integrated circuit. The failures we’ve had have all been in generic parts, not unobtainable custom ones. Although there are still rather a lot of generic parts in this machine.

In the past when something has broken on this machine I’ve called out a professional to look at it, so it has been expensive as well as impractical. But with the coronavirus going on, when our Revox stopped in the middle of a tape, lit up all the buttons, and refused to start again, it didn’t feel like a good time to be trying to call out an experienced senior repair fellow. And yet, with the coronavirus going on and our horizons shrinking fast, I suddenly really wanted the old Revox not to have broken down. And so these six paragraphs of introduction lead to the much briefer story:

This is where the magic of the old-school forum-based pre-social-network World Wide Web comes in. I open the back of the Revox and find that fuse F6 on the panel next to the distribution board has blown. I search for “revox a700 fuse f6 blown” and I find this magnificent post:

So specific! The capacitor and rectifier numbers don’t actually match up with those on our board, but with the help of a service manual I can see which ones they’re referring to.

This is the power supply board from the A700. The Frako capacitors are, apparently, famous for failing in short-circuit and blowing up other things on the board. This one seems to have only blown up the adjacent rectifier.

I don’t much enjoy soldering, but I de-soldered and tested the four big capacitors and found that the second one (the smallest, a 2200µF 16V cap) had failed. I ordered some replacement caps and rectifiers (the rectifiers are the round black things beneath the big capacitors: the green rectangular chunk is also a rectifier, but I hoped I wouldn’t have to deal with that). I also got replacements for the three smaller Frako capacitors on the board, which unfortunately I could only get with radial wiring: two wires into the bottom of the capacitor rather than one at each end.

When the replacements arrived, I soldered in the new capacitors, but I hesitated over the rectifiers. I’d tested the three round ones with the diode tester on my multimeter and they all showed the right forward voltage. I would really prefer not to have to change those, as they’re quite fiddly. So I put the board back in, slotted in a new fuse, turned on the power… and the fuse blew again.

Gritting my teeth, I desoldered and replaced the three round rectifiers, something that took me longer than I would like to admit, then put the board back and tried again, and it works!

The original 2200µF capacitors are rated at 40V, 16V, and 2x 25V respectively. I ordered replacements at similar ratings, and only afterwards realised I could have bought and fitted four higher-rated caps for 40V or above (they’re smaller nowadays anyway) and they would have fitted fine. The higher voltage-rated ones also have better temperature tolerance, with a 105 degree max instead of 85. But I’m new to this kind of thing.

Anyway: that’s all. I really just wanted to record my thanks to Mart, the author of the reply I quoted above, and also to Kurt, who asked the question. This exchange is from 2014, which is recent enough to give hope that the searchable, stable, forum-style Web might still be alive somewhere.